I found some pretty nursing dresses. Although I can’t vouch for their quality, I like the design and they’re floral! Floral prints are harder to find; Women seem obsessed with solid black dresses these days thanks to Coco Chanel.

Interesting article wherein the problem of sleeves is discussed. 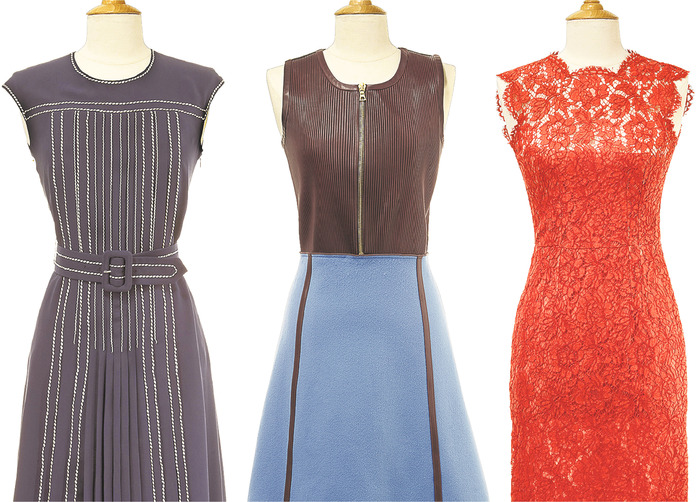 Bring back the Sleeves!

I have never encountered a dress code that only set out standards for one sex. They are written for both sexes.

A proper, respectful  environment is an education in itself! The environment reflects and encourages certain ideals.

What you wear changes behavior. Both the way you behave and the way you are treated. It is not insignificant it is part of a good education.

What girls and boys can learn from dress codes:

These might be the best lesson they learn all year.

Taken from my personal experience:

Also on topic: How Girls Should Dress to Attract the Right Kind of Man

My wedding dress looked a bit like 3.not as form fitting and without the flare. I would caution brides to be a little more conservative. While I was completely comfortable in it that day, I’ve grown in modesty and regret the dress. I agree if you can cover up your upper arms do,do not wear boring strapless, find a flattering, suitable cut and avoid “cover ups.” Great advice. I wish I read this 7 years ago. Hind sight is 20-20.

Lexie has featured at this blog before:

Here are some recent comments from Lexie on what women should wear to their wedding:

“For those who need actual guidelines – and, let’s be realistic, many women have been brought up without any sense of propriety – here are some basic pointers: cover the knees and cleavage – it’s okay to show you have cleavage but not to show the cleavage itself. 1 is acceptable, 2 is not, and 3 is debatable/depends on culture.”

“I think the biggest mistake that women make when attempting to be modest is to take the boring white strapless evening gown and merely put some lace or a bolero over the top to cover the shoulders and/or cleavage. Modesty isn’t just about complying with some rules about covering various parts of the body. A…

A Jewish woman reflects upon modest dress and the changes it has brought to her life How Dressing Modestly Gave me More Confidence About My body the article is an interesting read but what struck me most was why she began dressing modestly. She was simply following a code of conduct.

I had never thought of myself as a naturally modest person. I was the “bikini/short-shorts” gal who, in the summer before college, started covering up, not because she cared about modesty or because she thought dressing immodestly was wrong or detrimental, but rather because she was adopting an observant Jewish life and modest dress was part of halacha. Just as the Jewish nation accepted the Torah saying “naaseh v’nishmah” (first we’ll do and then we’ll understand) I took on modesty in a similar way.

Her modesty and understanding of  modesty grew from there:

But then something happened – I remember so clearly the first day I wore a long skirt to the mall at seventeen years old. A guy passed me by and gave me the old “up down,” but my “up” and my “down” were covered up, and I actually let out a quiet “yes!” when I realized that I was able to retain ownership of my body that he couldn’t gain access to. Which makes me understand that I have always been a modest person who was conditioned by societal values to behave in a way that conflicted with my innate values and left me feeling violated on a regular basis.

Now maybe some people were offended upon reading the standards. But the notice didn’t state it was immoral for men to wear shorts or for women to wear tank tops it just requested the parishioners to follow these basic standards when attending Mass. It was a code of conduct to follow and guess what? The Parishioners followed it;  The entire church (which was packed) was dressed to those standards. Well beyond these simple standards in fact.

I have been wearing only skirts and dresses for two years now and I have just begun realizing its impact. A skirt reminds me that I am not here to compete with men – that I don’t need to compete with men to prove my worth. It is a gentle reminder of who I am- a wife, a mother, a woman.

At first it was difficult. Skirts and dresses had always been the exception for me. I grew up in the country spending my days riding horses (astride *gasp*) and building forts in the woods with my brothers. But I began to take more thought into what I wore when my second daughter was born.

At first, I was afraid people would ask me why I didn’t wear pants. But that hasn’t happened yet. I have only received compliments on my outfits. The only question I have ever received in two years concerning my dress is, “where did you find such a beautiful skirt?”

Do I miss pants? Surprisingly, no, not really. In fact, I recently tried on a pair of jeans and was shocked to find them intolerably uncomfortable. We lost something when women gave up their long flowing dresses for jeans. We lost a certain elegance, modesty and femininity; I wanted to regain it, if only for myself.

you could  wear an attractive hat instead of a veil. However, I found church hats to be scarce and more expensive.

Copied from this site : “50 Simple Stept to Wearing A Chapel Veil or Mantilla”

You might think that the only step to wearing a mantilla to Mass is, you know, wearing it. (And getting one if you don’t have one.)

Such ignorance! But don’t worry, that’s why I’m here.

I’ve broken down this incredibly complex process into 50 simple steps. I can’t promise you success, but if you follow my 50 steps, you will succeed!

“Modesty acknowledged [a woman’s] special vulnerability, and protected it. It made women equal to men as women. Encouraged to act immodestly, a woman exposes her vulnerability and she then becomes, in fact, the weaker sex. A woman can argue that she is exactly the same as a man, she may deny having any special vulnerability, and act accordingly, but I cannot help noticing that she usually ends up exhibiting her feminine nature anyway, only this time in victimhood, not in strength.” Wendy Shalit.